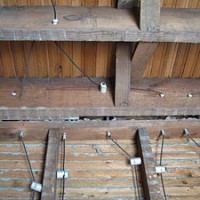 If you own an older building, wired before the 1960s, chances are you have knob and tube wiring behind your walls. As safer, more efficient and more effective wiring methods have been introduced, these systems are being widely replaced; today, you’re just as likely to find knob and tube materials in antique stores as you are in residential and commercial structures. Why should property owners consider upgrading? There are several reasons.

Quick Look at Knob and Tube

There are two major components to the knob and tube system, as the name suggests. Porcelain knobs are screwed into the wood and used to support an individual wire. In places where the wire travels through an obstacle (such as a stud or wall), an electrician would install a porcelain tube and snake the wire through. Knob and tube was the standard electrical wiring method from the 1880s to the late 1950s. When first introduced, it was the economical choice. The other option then was to use conduit systems with armored cable and metal junction boxes, but the cost for the cable was twice that of knob and tube. Because of its budget-friendly nature, electricians continued to use knob and tube in new construction, even as late as the 1970s.

Knob and tube systems do not conform to today’s electrical code, meaning it is no longer used in new constructions. If you own an older home, however, your property is “grandfathered” and can legally keep the existing knob and tube setup. Yet there are a few reasons why you might not want to:

Knob and tube still functions, and if the components and wiring are in good condition, they are generally safe when used properly. The problem is that it is easy to demand too much of these antiquated systems, overload them and create unsafe modifications. Upgrading will deliver more efficiency, higher capacity, improved safety and increased peace of mind.

At All Wire Electric, we believe success is built on a foundation of honesty, integrity and value.

These principles guide our team of experienced, professional, unionized electricians in every contract we take on — commercial or residential, new build or repair, big or small. Customer service is paramount at All Wire: We emphasize high-quality work at a fair price, and we stand behind our work 100 percent.*

*All labor and material are covered by a 1-year warranty.